Abstract:      The PI3K/AKT/mTOR signaling pathway plays a key role in regulating growth and metabolism. The metabolism of energy is usually accompanied by the metabolism of substances, and the cycle of substances is also accompanied by the generation and utilization of energy. Such a process should be well adjusted to maintain the stability of life activities according to the demand for substances and energy of cells and the body.
Keywords:    PI3K AKT mTOR Pathway, Glucose Metabolism Pathway, Signal Transduction

The downstream target of PI3K/Akt is mammalian target of rapamycin (mTOR), and the downstream transcription factors of mTOR include star molecules such as HIF1α, c-Myc, and FoxO. As a phosphatase, the tumor suppressor protein PTEN can dephosphorylate Akt and reduce its activation to prevent all downstream signaling events regulated by Akt, and is also a negative regulator of PI3K.

The PI3K/AKT/mTOR signaling pathway is involved in the response to insulin and insulin-like growth factors. After eating, the broken down glucose enters the bloodstream and promotes the release of insulin, which acts as a signal in response to nutrient abundance and directs cells to absorb and utilize these nutrients. 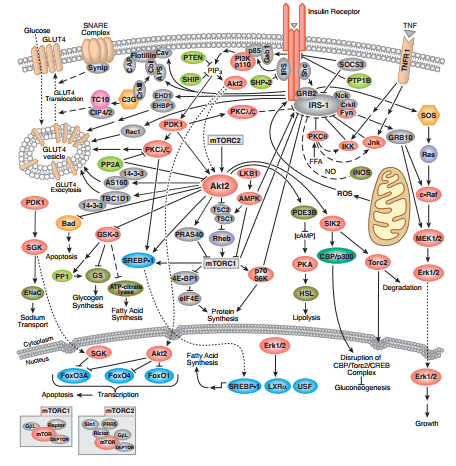 The PI3K/AKT/mTOR signaling pathway is regulated by downstream negative feedback signals. Negative feedback from the Akt/PKB, PKCζ, p70 S6K and MAPK cascades leads to phosphorylation of serine and inactivation of the IRS signaling pathway. When mTOR is inhibited for a long time, the activity of S6K1 will also be reduced, and the feedback inhibition loop of S6K1 on RTK will be released. Then, there will be more compensatory loops to compensate for the survival-promoting factors such as AKT and AGKs. In addition, S6K1 can also inhibit MEK-ERK signaling pathway. This is the reason why the clinical use of mTOR inhibitors to fight against tumors is not satisfactory as well.